Thomas a German manager in his 40s, working for a German company and expatriated in Brazil. He was going to lead a team composed of 10 people, half Latinos and half Brazilian. Thomas and his wife received a cross-cultural training when they arrived in São Paulo. The training was supposed to be delivered in German by a German speaker trainer but the couple asked the trainer to deliver it in Portuguese …because they had been having Portuguese courses for six months and they wanted to practise it.

The evaluation of the cross-cultural training was very good and Thomas commented that he felt well prepared to face the cultural aspects of his new team.

The first time I saw him, he looked very serious and with an impenetrable air, surely, he did not want to be there. I was a little scared, so I took a deep breath and I thought… here we go!

I explained how the coaching works and the objectives his boss desired to achieve in the process, of which the basic and more important one, was to be more “flexible”.

When I mentioned the word “flexibility”, he stared at me and said: ”I know what you mean by being flexible here in Brazil. It means making the least effort to do things, having no organization or processes, and blaming the circumstances or God because things do not work. In the rest of the world, each one of us has the responsibility to make things work. It is not God who helps us but each one does his part according to the organization and processes that have been discussed and put in advance. That allows us to move forward and achieve the company’s objectives and goals. I understand why things in Brazil are so difficult”

Firstly, I perceived that he was totally in defense mode, seeing cultural differences as a threat. Secondly, he was dealing with an anti-value. The Brazilian or Latino’s concept of flexibility was the opposite of what he had learned all his life. So how to deal with an anti-value?

Thus, I sent him to speak with his Brazilian and Latino colleagues, peers, acquaintances etc. and to ask them what it meant to be flexible.

Two weeks later, he came back with his findings, looking more relaxed than the first time. He started to tell me about the interesting conversations that he’d had with different people. Conversations about the big period of inflation in Brazil and how the country changed its monetary system four times in a few years, how political contexts in different Latin-American’ countries change every day and impact on business practices, how terrorism and violence prepare people to deal with uncertainties…. and more. So, the meaning of flexibility, in an ever-changing environment such as Latin America, is to be attentive to changes and generate solutions which may have to be improvised many times. Analyze the context and take risky decisions, and be creative to find quick and short-term solutions.

Lessons of this story

First the importance of “deconstructing words”. Flexibility means different things in different cultures as well respect or harmony mean different things from Western perspectives than Asian perspectives. Encourage people who work in multicultural contexts, to practice “deconstructing words”. What does this word or concept mean in your culture? Could you please give me an example?  To understand, the cultural meaning of words allows us to avoid misunderstandings and conflicts and have a better comprehension of specific issues.

The second learning is, when working in a multicultural team or environment, it is important to create spaces where people could have “cultural conversations”. To understand what, why, how, when of some behaviors or beliefs, help people to go forward from defense to acceptance stage or even to move along to the adaptation stage where they can take advantages of cultural differences to improve performance into the team. Encourage managers and leaders to spend time in cultural conversations is a great opportunity to know each other and to build respect and trust. 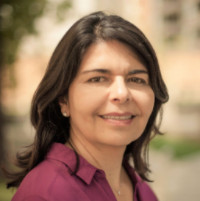 Verónica De la Fuente is an intercultural consultant and professional coach, accredited by ICF. She has worked with global professionals and multicultural teams for over 12 years, first in Brazil, where she began his career in the intercultural field and now in Switzerland. She has a degree in business administration and she worked in the financial sector for many years. She is co-founder of Leman-Experience (www.leman-experience.ch)  and she has her own consulting firm VDF Coaching & Culture
(www.vdfcoachingcultures.ch)
Sharing is caring