Mirza Khan has come to Basel via Italy. His request for asylum in Switzerland was denied. Not safe but you can survive there. His family might be active in politics and might fight for the separatist cause of the Kashmiris, but since this conflict is as old as most of us, we don’t hear about it any more. You have to go there to see the military presence of an occupied area whose people neither feels that they belong to India, nor Pakistan. A beautiful, Swiss-like paradise locked in a conflict between two opponents. Not poor, but still prone to bomb attacks and border shootings.

Lacking a cause for protection, Mirza should be sent back to Italy according to the Dublin agreement. His family has to pay for an immigration lawyer to increase his chances of being able to stay. Mirza has been waiting for this decision for six months. During the processing time, his life was on hold. No studies, no work. He is 26, not married yet.

By the time Mirza will know if he can stay here, the chances to continue his college education will be low. He might find a job in a kitchen as support staff. His Swiss German will probably have grammar errors as he might not have time to attend German classes. He might fall prey to offers for credit and buy a few clothes too many. He’ll never be rich but he might just get by. Some young men in his position start drinking alcohol, smoking marijuana and eventually dealing drugs as a side income.

But Mirza won’t. He is lucky. His cousin is in Basel and will support him through the tough times. He will pay his lawyer and ensure that Mirza stays out of trouble. Not every young man sent away by his family is lucky, though.

The current debate in Switzerland about the revision of the Asylgesetz (#AsylG), the law controlling the treatment of asylum seekers, surprised me. Opponents of the revision are found at the right and left spectrum of the political arena. Without going into the pros and cons, I think it is important, that we “interculturalists” look at the propaganda material and learn more about individuals and how our asylum processes influence their biographies.

A more effective asylum process would make it easier for asylum seekers to continue with their lives, as a decision about their status would be taken faster. We can only discuss integration into the workforce when their work and residence permits have been cleared.

Before we can support migrants, we need to put ourselves in their shoes. We need to also remember that most of us do not have to worry about our daily needs all the time. Providing for the survival of the whole family (including grandparents, uncles, and aunts) is on the minds of many migrants from economically less affluent countries most of the time.

What concerns me is that the expression “migrant” in Switzerland often has a negative connotation while it should be a neutral expression. I pulled up some migration data from the Swiss Federal Office of Statistics for this article and I was tempted to shout out: “Oh my God, we have to be careful. The Italians and Germans are taking over this country”. (Imagine what that means for Swiss soccer.)

In 2014* 15.3% of “migrants” were Italians, and the second largest population were Germans, at 14.9%. We also have to remember that the Swiss count an “Italian” who has been born in Switzerland as a “migrant” as long as he does not have a Swiss passport. It might be a surprise that the figure of 22% “foreign” population includes second-generation immigrants, who do not want to give up their original passport nationality.

On 28 May 2016, Capacity Zurich, an NGO, launched their business mentoring program** for migrants. I support this program as a business mentor. My mentee is a female engineer from Serbia. She would like to build a foundation for helping peasants improve their living conditions by building and providing eco-friendly housing for them. In a next step, she’d like to introduce alternative energy power plants (working with biomass) in Serbia. I’m humbled. Her English is fluent. She has three children. Her first challenge is to research with an old computer. I hope I can help her create the business plan for the foundation, attract donors, start crowd-funding and maybe even come up with a case for her power plant, which she could present to large companies such as ABB. At the end of the business mentoring program, the participants were beaming. One comment almost made me cry.

“I have been here for ten years and never could integrate in(to) this society. I will try again now.”

As intercultural coaches, trainers and researchers, we can promote clarity in the discussion about migration, have a voice on social media and work with migrants directly to help them improve their situation in this country. 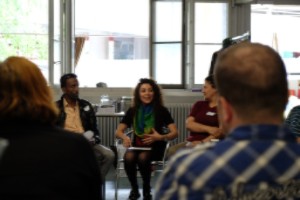 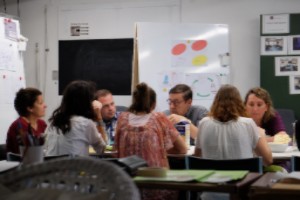