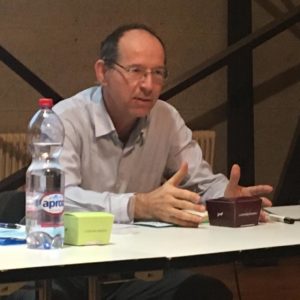 What would you say are some specific shortfalls in the way intercultural competence/communication is taught in higher education?

If we want to efficiently develop intercultural communication competence, we need to do it in a holistic way. This means that we have to get out of the purely cognitive aspect and involve the body and the emotions of the learners.

The interaction with people from other socio cultural backgrounds, affects the person as a whole. Therefore, you cannot separate thinking (the cognitive aspect) and the emotions (all the more “animal” reactions) people have when confronted by somebody who is different. This calls for a new approach to teaching intercultural communication, for example, without tables and chairs as is the usual practice in academic settings.

One of the shortfalls is to consider inter-cultural communication as something happening only in the brain. Students have a tendency to grasp things intellectually. When it comes to real situations with emotions, interests and personal gains or losses, then the story changes.

Another shortfall is the often-seen simplification of culture in relation to national characteristics. I’ve heard about teaching programs and books where one talks about Indian or Chinese or Arab culture. This is a gross oversimplification. Instead of nationality or ethnicity, we could also distinguish people according to language, religion, whether they work and live in cities or in the countryside, age groups etc.

So if we are to move away from the current “tables and chairs” approach to teaching this subject, what would you reckon to be a more effective method?

Anything that involves the personal experience! We need to feel things in our bodies. We need to feel the (positive and negative) tension between two or more individuals. We can focus more on what attracts us to and what we consider repulsive about other people‘s behaviors. To do this, we need mixed groups of learners. Maybe more role-plays, critical incident analysis, constellations, instead of lectures.

What do you see as an imminent threat of this emerging trend of fundamentalism to ongoing efforts at promoting intercultural awareness and competence?

Due to increased globalization, there is an opposite reaction of localization or fundamentalism from those corners that do not see the benefit of globalization. This creates a desire to go back to one’s own “original” culture. We can see this with the promotion of Hinduism as being the original religion of India. Likewise the “America first” mantra falls into the same category of cliché simplifications of what culture is nowadays.

Fundamentalists or nationalists basically believe in the fallacy that there could be a clash of civilizations and they want to emerge winners should that day come. They are the ones who think in divisive terms of “them” and “us”. As an antidote to this group of people, we need an integrative, inclusive approach. We need a “We” feeling!